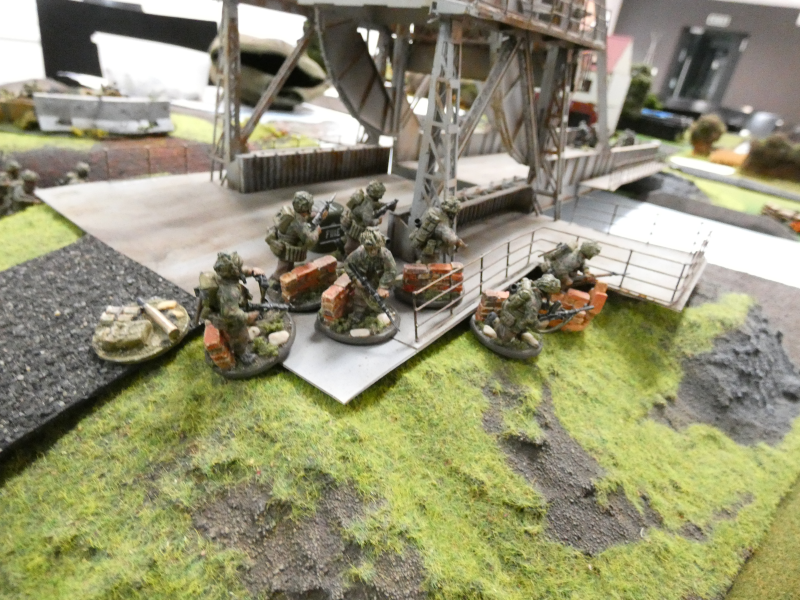 On the 8th June 2019 we met in Rumia (northern Poland) to play some scenarios related to D-Day and Normandy. We chose three different scenarios: Omaha Beach, Pegasus Bridge and Falaise Pocket. The main fighting was during the second one, where each player took a part in competition. We allowed to shift up to 2 order dices from neighboring tables to another and eventually we met together on Pegasus. Main opponents were Zimmer (German forces) and Jurand (Allied forces). They were supported by: Szymon, Maciej (Axis) and me – Ranger (the 1st Polish Armoured Division) – and Liso (US Army). We used rules from this source: https://jayswargamingmadness.blogspot.com/2014/09/bolt-action-scenario-pegasus-bridge.html (really good idea mate!). I wrote this battle report using notes of Zimmer and also from my point of view as player (with 2 dices) :)

This battle report (Pegasus Bridge) is abridged version in relation to original Polish article from my blog. Instead of British paratroopers there were Polish guys in grey berets. Hope you will enjoy it!

It was during night. German soldiers were entrenched with submachine guns and rifles. They were waiting for enemies, but didn't believe, that they had already landed in Western Europe. Inexperienced landsers were tensed up.

Flare-chute threw light on the ground and German saw opponents behind Orne river. Polish paratroopers were waiting for that and opened fire to them using Bren machine guns. One Wehrmacht soldier died. The others went back for a while from the Pegasus Bridge and were excepting army reinforcements. Bullet from captured Pak40 destroyed mortar section, which was hiding behind sandbags on the south.

Panzer III went to fight as the first additional unit in Polish sector. It wasn’t the newest German tank in Normandy, but it had great asset against paratroopers – thick armour and it couldn’t be penetrated by small-arms weapons. First burst from MMG was inaccurate.

Axis reinforcements arrived: Marder H and Sd.kfz 251/1 with another unit on the south (German sector) and Waffen SS unit on the north (Polish sector) of battlefield. Captured 75 mm gun aimed Panzer III, but missed. Paratroopers were surrounded by enemies. Flare-chute burned and it was really dark again. Soldiers were nearer and nearer because of reduced visibility. One of Polish detachment attacked Wehrmacht soldiers in close combat next to the forest, but Germans were ready to that and Allied troops was destroyed quickly. PIAT attacked Panzer III from right side. Fire was extinguished by tank crew. From the southern part of battlefield inexperienced Axis soldiers tried to prevent paratroopers from crossing the bridge, but their lack of fighting skills was big challenge for their lieutenant.

Then came Allied reinforcements from the east in German sector. American Rangers (Omaha table) and soldiers from the 1st Polish Armoured Division (Falaise table). Smoke grenades were covering their positions. Sherman’s sergeant decided to hit Marder III H, but only destroyed its track. Rangers used their guns to smash German HQ building – lovely coffeehouse. Their bullets went through smoke and hit one of two adjutants. Polish soldiers did the same and killed another NCO. Barrage fire was terrible. Lonely Wehrmacht lieutenant funked it and run away from the battlefield.

It was hard night for both sides. Soldiers had problems with finding a way. Polish paratroopers tried to destroy both tanks. Panzer III was fresh out of it, but Panzer IV had damaged track. It wasn’t obstruction to devastate M4 Sherman from close range, in front of the German HQ building.

Rangers overtook the one and only building there, but Werhmacht veteran troop charged them and it was bloody act. Polish unit attacked German MMG next to the Pegasus Bridge on the south. It was successful mission, but ¾ soldiers were wounded. They didn't survive for a long time because of another MMG team.

Polish paratroopers tried to capture control tower of the Pegasus. Lonely medic wasn't able to did this. German unit attacked along the bridge, but Polish hard guys blocked their march and pushed them down to the Orne river.

Panzer IV received hit from Pak40, but it was again destroyed track. Zimmer shifted Allied back from their sector and got back their HQ building & the southern road to Pegasus Bridge for 2 points. Jurand still had Pak40 for 1 point. The 7th round was near.

Flare-chutes were out of stock, it was still dark. German NCO from destroyed Wehrmacht unit wandered alone in the Allied sector and he was trying to avoid Polish forces. Paratroopers saw him for one moment, but he had great luck and survived 10 hits from Stens!!! He came to the control tower and blocked the last chance to draw for Jurand (we didn’t calculate order dices, only objective points for locations).

It was a pleasure to play together this scenario. Thank you guys and The Culture Station in Rumia!