21th Panzer Division versus Poland 1939 in a fierce infantry engagement 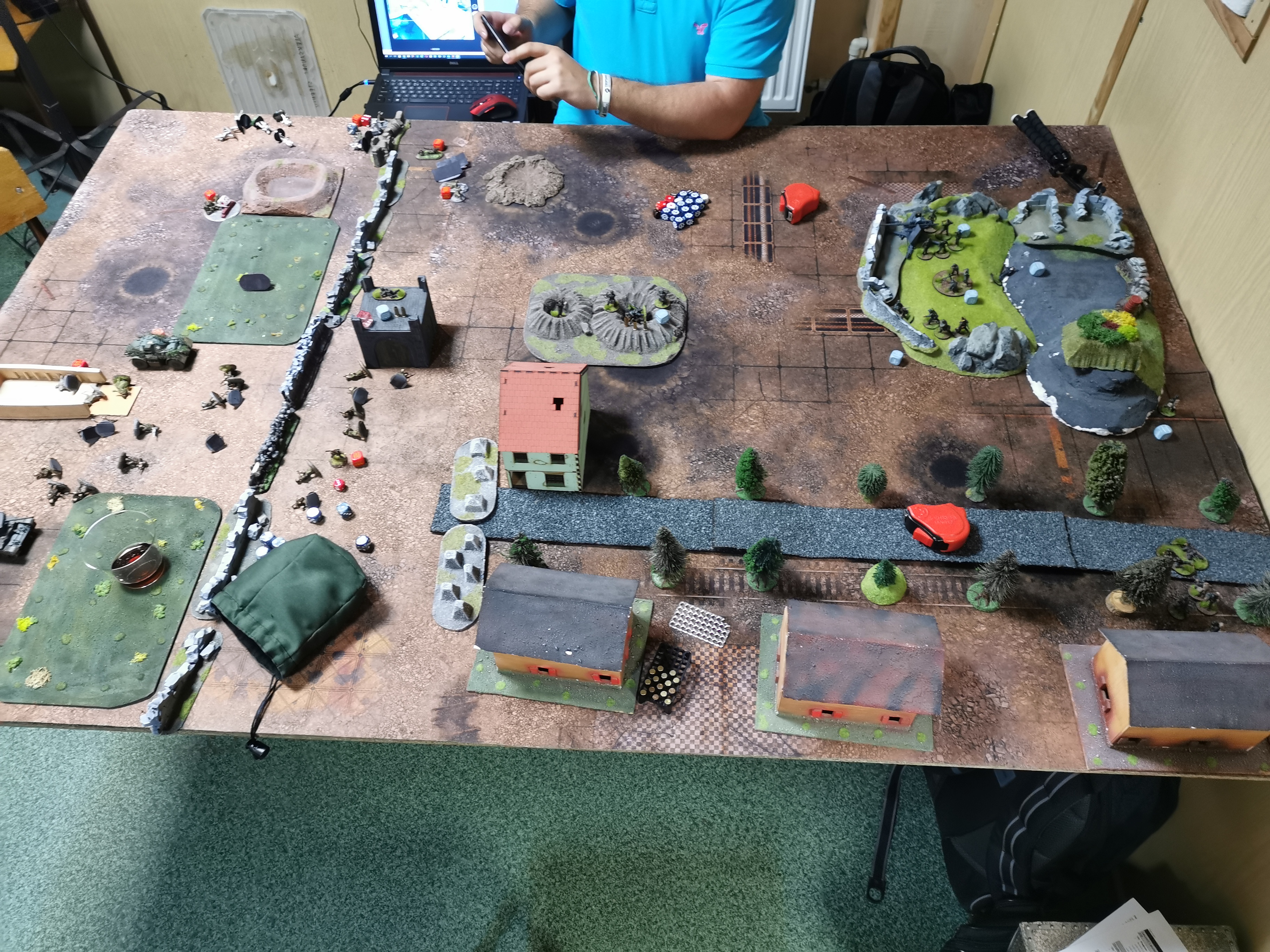 The landing started. Allies got the landing crafts and decided to conquer Normandy.
In this (not that much) alternative history, the Polish Maczek's Division landed on Echo Red Beach. It was defended by the Strafbattalion platoon.
The game was played 1v1, 1000pts per side.
Polish forces (on British Normandy rules) : Cromwell, Humber, Landing Craft, lieutenant, three infantry squads, PIAT, Sniper, medic, MMG team, light mortar.
Germans: lieutenant, two 5man Strafbattalion squads, Air observer, Sniper, Pioneers with flamer, Flak 88mm, medium mortar, kubelwagen with MMG, MMG team and a MMG bunkier + 2 minefields(one dummy) from campaign book.
The Germans were deployed on the shore, and in the fort. Some units were hiding in the holes between the fort and the Beach.
The Allies had an initiative in the first turn - most of Their units came on board before the Germans got Their order dice. The german air strike was called. When Germans finały got Their orders, they managed to put pressure on the allied landing - multiple mmgs shot down a couple of poles, pinning the others.
The second turn was started by an airstrike - the plane got on the right target on the Beach, it pinned half of the poles and killed half of the target squad. The poles didn't escape though.
The first couple of orders came from the Germans - they put additional pins on the advancing Allies. The flak made the first shot ever (first time playing with it after painting) and managed to destroy the Cromwell. When Poles got Their orders only a couple of teams followed, while the rest went down. Multiple shots from Mmgs eliminated the lieutenant while he was going out of the landing craft.
The third and fourth turn were a struggle by the poles to get out of the Beach. The minefields made them pick a particular Road, where the Germans were prepared to shoot them down. The poles managed to eliminated one MMG and scared the Kubelwagen who retreated one turn, but they made only small progress.
The Allies finally got out of the Beach. One Unit managed to get though the first Line of defence and pass the bunker. But then they got attacked by the Pioneers hidden in a building. They eliminated the Polish squad completly. But then the Humber got very close and killed all the Pioneers in the open.
In the sixth turn the Polish mortar team rushed to get off the Beach to the place where the german mmg was standing before it was eliminated. Humber eliminated the german Sniper.
But then it turned out that we will be playing another turn. The Flak 88mm shot down the mortar team and the rest of the german forces pinned the Allies on the Beach.
The game was over. Allies didnt manager to get out of the Beach After landing.
Axis were victorious in this one.